X-ray fluorescence (XRF) analysis is one of the most common non-destructive methods for  qualitative as well as quantitative determination of elemental composition of materials. It is suitable for solids, liquids as well as powders. There are two main methodological techniques that are wavelength dispersive analysis (WD-XRF) and energy dispersive analysis (ED-XRF) (In the next post we will briefly discuss about WDXRF & EDXRF ,this post will only explain the basics of x-ray fluorescence which is required to understand the upcoming posts about WDXRF & EDXRF ). The spectra are collected simultaneously in a wide energy range. The range of detectable materials covers all elements from Sodium (Na) to Uranium (U) and the concentration can range from 100% down to ppm. Detection limit depends upon the specific element and the sample matrix but in general heavier elements have higher detection limit.

X-ray Fluorescence (XRF) Spectroscopy involves measuring the intensity of X-rays emitted from a specimen as a function of energy or wavelength. The energies of large intensity lines are characteristic of atoms of the specimen. The intensities of observed lines for a given atom vary as the amount of that atom present in the specimen. Qualitative analysis involves identifying atoms present in a specimen by associating observed characteristic lines with their atoms. Quantitative analysis involves determining the amount of each atom present in the specimen from the intensity of measured characteristic X-ray lines. The emission of characteristic atomic X-ray photons occurs when a vacancy in an inner electron state is formed, and an outer orbit electron makes a transition to that vacant state. The  energy of the emitted photon is equal to the difference in electron energy levels of the transition. As the electron energy levels are characteristic of the atom, the energy of the emitted photon is characteristic of the atom. Molecular bonds generally occur between outer electrons of a molecule leaving inner electron states unperturbed. As X-ray fluorescence involves transitions to inner electron states, the energy of characteristic X-ray radiation is usually unaffected by molecular chemistry. This makes XRF a powerful tool of chemical analysis in all kinds of materials. In a liquid, fluoresced X-rays are usually little affected by other atoms in the liquid and line intensities are usually directly proportional to the amount of that atom present in the liquid. In a solid, atoms of the specimen both absorb and enhance characteristic X-ray radiation. These interactions are termed 'matrix effects' and much of quantitative analysis with XRF spectroscopy is concerned with correcting for these effects. 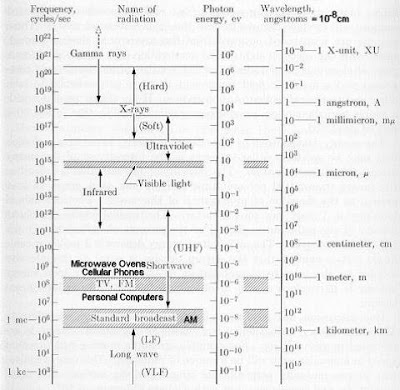 X rays are electromagnetic radiation. All X-rays represent a very energetic portion of


the electromagnetic spectrum (Table 1) and have short wavelengths of about 0.1 to 100 angstroms (Å). They are bounded by ultraviolet light at long wavelengths and gamma rays at short wavelengths X-rays in the range from 50 to 100 Å are termed soft X-rays because they have lower energies and are easily absorbed.The range of interest for X-ray is approximately from 0.1 to 100 Å. Although,angstroms are used throughout these notes, they are not accepted as SI unit. Wavelengths should be expressed in nanometers (nm), which are 10-9 meters (1 Å = 10-10 m), but most texts and articles on micro probe analysis retain the use of the angstroms. Another commonly used unit is the micron, which more correctly should be termed  micrometer  (μm), a micrometer is 104 Å. The relationship between the wavelength of electromagnetic radiation and its corpuscular energy (E) is derived as follows.

For all electromagnetic radiation:

Note the inversion relationship. Short wavelengths correspond to high energies and long wavelengths to low energies. Energies for the range of X-ray wavelengths are 124 keV (0.1 Å) to 124 eV (100 Å). The magnitudes of X-ray energies suggested to early workers that Xrays are produced from within an atom. Those produced from a material consist of two distinct superimposed components: continuum (or white) radiation, which has a continuous distribution of intensities over all wavelengths, and characteristic radiation, which occurs as a peak of variable intensity at discrete wavelengths.

A general summary of the properties of X-rays is presented below:

THE ORIGIN OF X-RAYS 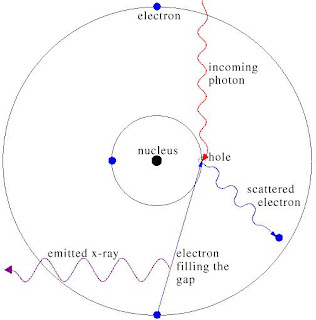 
(photon) of sufficient energy. The energy of the photon (hν) must be greater than the energy with which the electron is bound to the nucleus of the atom. When an inner orbital electron is ejected from an atom, an electron from a higher energy level orbital will transfer into the vacant lower energy orbital (Figure). During this transition a photon may be emitted from the atom. To understand the processes in the atomic shell, we must take a look at the Bohr’s atomic model. The energy of the emitted photon will be equal to the difference in energies between the two orbitals occupied by the electron making the transition. Due to the fact that the energy difference between two specific orbital shells, in a given element, is always the same (i.e., characteristic of a particular element), the photon emitted when an electron moves between these two levels will always have the same energy. Therefore, by determining the energy (wavelength) of the X-ray light (photons) emitted by a particular element, it is possible to determine the identity of that element.

PRINCIPLE OF THE X-RAY FLUORESCENCE PROCESS

If the primary energy of X-rays is equal to or is larger than the binding energy of an inner shell electron it is likely that electrons will be ejected and consequently vacancies are created. The hole state has certain life time and becomes refilled again. The transition of the excited atom into a state with lower energy occurs via two competitive processes, the above mentioned photoelectric and Auger effects. In the photoelectric effect, the recombination is accompanied by a transfer of electrons from the outer shells with energy Em into the inner shells with energy En filling the vacancies. This process induces the emission of a characteristic X-ray (fluorescence) photon with energy

Therefore the energy of these secondary X-rays is the difference between the binding energies of the corresponding shells in the figure below. The excited atom can also recombine by emission of Auger electrons, instead of characteristic X-rays, via the Auger effect.
The probability that characteristic X-rays will be emitted - and not an Auger electron- varies from one element to another and is described as the fluorescence yield. For elements of low atomic numbers, the Auger effect dominates, whereas emission of characteristic X-rays is more likely for heavy elements.
Each element has its unique characteristic energy spectrum (Fluorescence spectrum) composed by the allowed transitions of the specific atom in the result of X-ray excitation. XRF technique consists on the study of the produced characteristic spectrum. The XRF emission induced by photoelectron effect is shown in figure below for an atom of titanium (Z=22), whose K-shell electron acquires sufficient energy to escape from the atom. 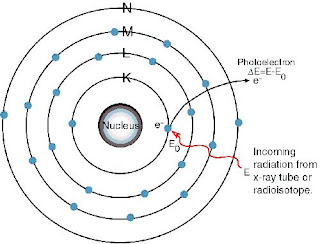 Photoelectric effect on the K-shell
An electron in the K-shell absorbs a
photon of the primary x-ray beam and
becomes free, while the atom gains a
vacancy in the K-shell. 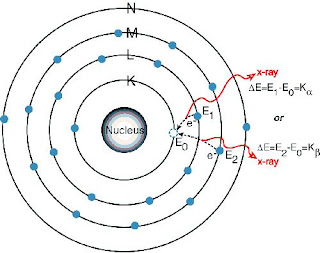 The K lines production
An electron from the L or M shell “jumps in” to fill the vacancy and in  turn, produces a vacancy in the L or M shell. In the process, the atom emits a characteristic photon from the x-ray  range of electromagnetic spectrum, unique to this chemical element 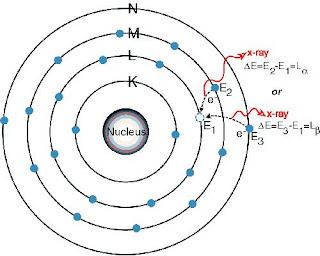 The L lines production
After a vacancy is created in the L shell by either the primary beam photon or by the previous event, an electron from the M or N shell “jumps in” to occupy the vacancy. In this process, the atom emits a characteristic photon, unique to this chemical element, and a vacancy in the M or N shell is produced

X-ray fluorescence provides a rapid non-destructive means for both qualitative and quantitative analysis. A wide range of materials varying in size and shape can be studied with minimal requirements for sample preparation. Detection sensitivities as low as one part in a million can be obtained with this technique.The two types of X-ray fluorescence i.e EDXRF and WDXRF will be discussed and explained in the next post .

Some basic terms and definitions related to X- ray fluorescence, which can be useful in the upcoming post .