Light which enters a photomultiplier tube is detected and produces an output signal through the following processes.
(1) Light passes through the input window.
(2) Light excites the electrons in the photocathode so that photoelectrons are emitted into the vacuum (external photoelectric effect).
(3) Photoelectrons are accelerated and focused by the focusing electrode onto the first dynode where they are multiplied by means of secondary electron emission. This secondary emission is repeated at each of the successive dynodes.
(4) The multiplied secondary electrons emitted from the last dynode are finally collected by the anode.

The photomultiplier tube generally has a photocathode in either a side-on or a head-on configuration. The side-on type receives incident light through the side of the glass bulb, while in the head-on type, it is received through the end of the glass bulb. In general, the side-on type photomultiplier tube is relatively low priced and widely used for spectrophotometers and general photometric systems. Most of the side-on types employ an opaque photocathode (reflection-mode photocathode) and a circular cage structure electron multiplier which has good sensitivity and high amplification at a relatively low supply voltage. 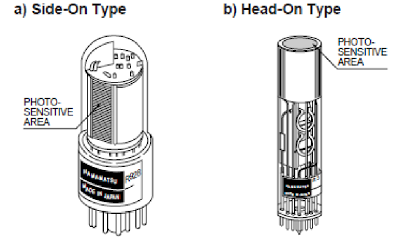 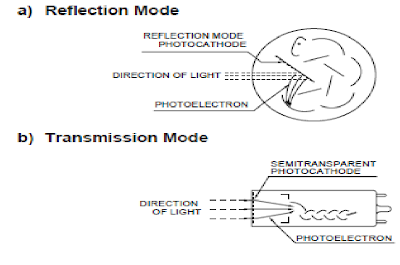 The superior sensitivity (high current amplification and high S/N ratio) of photomultiplier tubes is due to the use of a low-noise electron multiplier which amplifies electrons by a cascade secondary electron emission process. The electron multiplier consists of from 8, up to 19 stages of electrodes called dynodes.There are several principal types in use today.

2) Box-and-grid type
This type consists of a train of quarter cylindrical dynodes and is widely used in head-on type photomultiplier tubes because of its relatively simple dynode design and improved uniformity, although time response may be too slow in some applications.

4) Venetian blind type
The venetian blind type has a large dynode area and is primarily used for tubes with large photocathode areas. It offers better uniformity and a larger pulse output current. This structure is usually used when time response is not a prime consideration.

5) Mesh type
The mesh type has a structure of fine mesh electrodes stacked in close proximity. This type provides high immunity to magnetic fields, as well as good uniformity and high pulse linearity. In addition, it has position-sensitive capability when used with cross-wire anodes or multiple anodes. 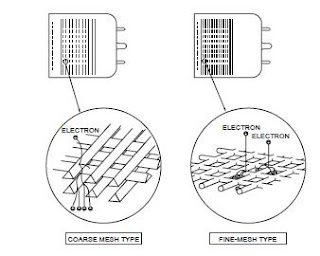 6) Microchannel plate (MCP)
The MCP is a thin disk consisting of millions of micro glass tubes (channels) fused in parallel with each other. Each channel acts as an independent electron multiplier. The MCP offers much faster time response than the other discrete dynodes.It also features good immunity from magnetic fields and two-dimensional detection ability when multiple anodes are used.

7) Metal channel type
The Metal channel dynode has a compact dynode costruction manufactured by our unique fine machining technique.It achieves high speed response due to its narrower space between each stage of dynodes than the other type of conventional dynode construction. It is also adequate for position sensitive measurement.

The photocathode is a photoemissive surface usually consisting of alkali metals with very low work functions. The photocathode materials most commonly used in photomultiplier tubes are as follows:

1) Ag-O-Cs
The transmission-mode photocathode using this material is designated S-1 and sensitive from the visible to infrared range (300 to 1200nm). Since Ag-O-Cs has comparatively high thermionic dark emission, tubes of this photocathode are mainly used for detection in the near infrared region with the photocathode cooled.

3) InGaAs(Cs)
This photocathode has greater extended sensitivity in the infrared range than GaAs. Moreover, in the range between 900 and 1000nm, InGaAs has much higher S/N ratio than Ag-O-Cs.

5) Bialkali (Sb-Rb-Cs, Sb-K-Cs)
These have a spectral response range similar to the Sb-Cs photocathode, but have higher sensitivity and lower noise than Sb-Cs. The transmission mode bialkali photocathodes also have a favorable blue sensitivity for scintillator flashes from NaI (Tl) scintillators, thus are frequently used for radiation measurement using scintillation counting.

6) High temperature bialkali or low noise bialkali (Na-K-Sb)
This is particularly useful at higher operating temperatures since it can withstand up to 175°C. A major application is in the oil well logging industry. At room temperatures, this photocathode operates with very low dark current, making it ideal for use in photon counting applications.

7) Multialkali (Na-K-Sb-Cs)
The multialkali photocathode has a high, wide spectral response from the ultraviolet to near infrared region. It is widely used for broad-band spectrophotometers. The long wavelength response can be extended out to 930nm by special photocathode processing.

8) Cs-Te, Cs-I
These materials are sensitive to vacuum UV and UV rays but not to visible light and are therefore called solar blind. Cs-Te is quite insensitive to wavelengths longer than 320nm,and Cs-I to those longer than 200nm.

WINDOW MATERIALS
The window materials commonly used in photomultiplier tubes are as follows:

1) Borosilicate glass
This is frequently used glass material. It transmits radiation from the near infrared to approximately 300nm. It is not suitable for detection in the ultraviolet region. For some applications,the combination of a bialkali photocathode and a low-noise borosilicate glass (so called K-free glass) is used.The K-free glass contains very low potassium (K2O) which can cause background counts by 40K. In particular, tubes designed for scintillation counting often employ K-free glass not only for the faceplate but also for the side bulb to minimize noise pulses.

2) UV-transmitting glass (UV glass)
This glass transmits ultraviolet radiation well, as the name implies, and is widely used as a borosilicate glass. For spectroscopy applications, UV glass is commonly used. The UV cut-off is approximately 185nm. 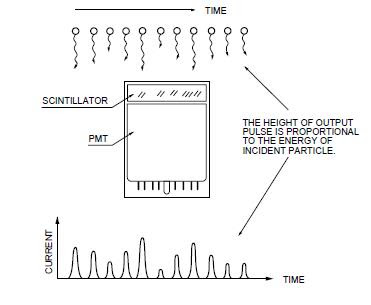 Scintillation counting is one of the most sensitive and effective methods for detecting radiation. It uses a photomultiplier tube coupled to a transparent crystal called scintillator which produces light by incidence of radiation.
In radiation measurements, there are two parameters that should be measured. One is the energy of individual particles and the other is the amount of particles. Radiation measurements should determine these two parameters.
When radiation enters the scintillator, it produce light flashes in response to each particle. The amount of flash is proportional to the energy of the incident racliation. The photomultiplier tube detects individual light flashes and provides the output pulses which contain information on both the energy and amount of pulses, as shown in Figure . By analyzing these output pulses using a multichannel analyzer (MCA), a pulse height distribution (PHD) or energy spectrum is obtained, and the amount of incident particles at various energy levels can be measured accurately.
Typical PHDs or energy spectra when gamma rays (55Fe, 137Cs, 60Co) are detected by the combination of an NaI(Tl) scintillator and a photomultiplier tube. For the PHD,it is very important to have distinct peaks at each energy level.This is evaluated as pulse height resolution (energy resolution)and is the most significant characteristic in radiation particle measurements.