Atomic force microscopy (AFM) or scanning force microscopy (SFM) is a very high-resolution type of scanning probe microscopy, with demonstrated resolution on the order of fractions of a nanometer, AFM provides a 3D profile of the surface on a nanoscale, by measuring forces between a sharp probe (<10 nm) and surface at very short distance (0.2-10 nm probe-sample separation). The probe is supported on a flexible cantilever. The AFM tip “gently” touches the surface and records the small force between the probe and the surface. 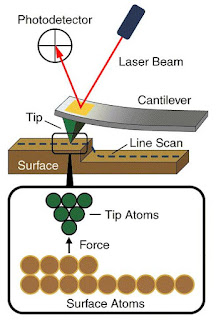 The AFM measures the forces acting between a fine tip and a sample. The tip is attached to the free end of a cantilever, The cantilever is typically silicon or silicon nitride with a tip radius of curvature on the order of nanometres and it is brought very close to a surface. Attractive or repulsive forces resulting from interactions between the tip and the surface will cause a positive or negative bending of the cantilever. The bending is detected by means of a laser beam, which is reflected from the back side of the cantilever. The figure  shows the basic concept of AFM :

What types of forces are measured?

In the So-called contact-AFM mode, the tip makes soft “physical contact” with the surface of the sample. The deflection of the cantilever Dx is proportional to the force acting on the tip, via Hook’s law, F=-k. x, where k is the spring constant of the cantilever. In contact-mode the tip either scans at a constant small height above the surface or under the conditions of a constant force. In the constant height mode the height of the tip is fixed, whereas in the constant-force mode the deflection of the cantilever is fixed and the motion of the scanner in z-direction is recorded. By using contact-mode AFM, even “atomic resolution” images are obtained. For contact mode AFM imaging, it is necessary to have a cantilever which is soft enough to be deflected by very small forces and has a high enough resonant frequency to not be susceptible to vibration instabilities. Silicon Nitride tips are
used for contact mode. In these tips, there are 4 cantilever with different geometries attached to each substrate, resulting in 4 different spring constants.
Advantages:
Disadvantages:
INTERMITTENT MODE (TAPPING)

The imaging is similar to contact. However, in this mode the cantilever is oscillated at its resonant frequency, Figure 4. The probe lightly “taps” on the sample surface during scanning, contacting the surface at the bottom of its swing. By maintaining a constant oscillation amplitude a constant tip-sample interaction is  maintained and an image of the surface is obtained.

(Attractive VdW) The probe does not contact the sample surface, but oscillates above the adsorbed fluid layer on the surface during scanning. (Note: all samples unless in a controlled UHV or environmental chamber have some liquid adsorbed on the surface). Using a feedback loop to monitor changes in the amplitude due to attractive VdW forces the surface topography can be measured.

The number of applications for AFM has exploded since it was invented in 1986 and Nowadays this technique is involved in many fields of Nanoscience and nanotechnology. The remarkable feature of STM and AFM instruments is their ability to examine samples not only in an ultrahigh vacuum but also on ambient conditions or even in liquids. AFM can image the non-conducting surfaces, and therefore it is very suitable for biological systems.

Possible applications of AFM are :